The U.S. Constitution was designed to protect the rights of U.S. citizens, but activist federal judges have misused the Constitution to effect social changes that they believe would be good for the country. The Supreme Court has distorted the rights guaranteed to us by the Fourteenth Amendment both to authorize the murder of unborn children and, more recently, to compel recognition of unnatural sexual coupling as if it was morally comparable to Biblically defined marriage.

CLDEF has actively worked to defend against this distortion of the Constitution to fight against the onslaught on the sanctity of life and traditional marriage.

In a recent article, we discussed what is probably Justice Clarence Thomas’ best dissent ever.  Justice Thomas discusses the flawed nature of much of modern constitutional law.  CLDEF’s briefs have brought this same message to the U.S. Supreme Court in dozens of briefs filed over the last 15 years.

Below are some of the Family & Life matters in which CLDEF has been involved.

Abortion supporters defend the right of a mother to decide not to have a baby — but what about mothers that want a baby, but not “that kind” of baby.  Even supporters of abortion rights should take pause at abortions performed because the baby is a girl, and the mother wanted a boy.  The Indiana law under review would prevent Eugenics-motivated abortion.  The pseudo science of Eugenics that provided the foundation for abortion rights is discussed in our amicus brief.  And the CLDEF amicus brief brief reminds the Supreme Court’s of the previous cases in which it approved the Eugenic policy of forced sterilization — cases which have never been overturned.

The Daily Labor Report published by Bloomberg Law discussed CLDEF as a social conservative organization that filed a brief in the Zarda case. 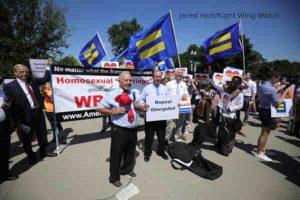 Today, Bill Olson was one of a dozen speakers at an anti-Obergefell rally on the steps of the Supreme Court.  The rally protesting the third anniversary of the Obergefell decision was sponsored by Americans for Truth About Homosexuality.  The other speakers included David Arthur, a former transgender/homosexual prostitute, who now serves the Lord and runs Belong Amen! Ministries and Coach Dave Daubenmire of Pass the Salt Ministries.

Today, an amicus brief was filed for CLDEF opposing the Obama Administration’s effort to force open the rest rooms, locker rooms and showers of public schools in Gloucester County, Virginia to members of the opposite sex.

Today an amicus brief was filed on behalf of CLDEF in the U.S. Supreme Court defending a Christian-owned pharmacy from attack by the Washington State Pharmacy Quality Assurance Commission due to that pharmacy’s refusal to stock and sell abortifacient drugs.  Although the Pharmacy Commission is a government agency, its steps were largely directed by Planned Parenthood of the Great Northwest. Read More

Today, an amicus brief was filed on behalf of CLDEF in the U.S. Supreme Court supporting two Texas laws requiring that abortions be performed only at certain types of facilities by physicians with  hospital admission privileges.   The brief set out why the pro-abortion petitioners, and the Obama Administration as amicus curiae, misrepresent to the Court its own abortion jurisprudence.  However, even more importantly, the brief explains why Roe v. Wade was wrongly decided.